Everything to Know About Booking a striped bass fishing charter

What are the best striped bass fishing charters?

What types of striped bass fishing charters are common?

How much do striped bass fishing charters cost?

When is the best time to go striped bass fishing?

The most popular season for striped bass fishing is summer, and most anglers book their trips 34 days in advance.


What is a Striped Bass?

Striped bass (Morone saxatilis), which you may know by the name striper, linesider, or rockfish, are one of the most popular game fish in the United States found both in fresh and saltwater. So popular in fact, it is the state fish of Maryland, Rhode Island, and South Carolina.

Originally a saltwater fish, striped bass have been successfully stocked in freshwater lakes and rivers across the United States, beginning a rich history of fisheries as early as the Colonial Period. However, they do need to be restocked periodically, as it is rare for them to spawn in freshwater as they do in salt.

They have a streamlined, silvery body that is marked with longitudinal stripes that start at their gills and run to the base of their tail.

How big do Striped Bass get?

The average size of a striped bass is between 10 and 30 pounds, and 20 to 35 inches long. They can grow to this size after living for up to 30 years.

Though in freshwater, they tend not to get as large as their saltwater relatives. Also, like many other fish species, their females are larger than the males.

On August 4th, 2011, Gregory Myerson landed a 81.88 pound, 54 inch striped bass near the Outer Southwest Reef off the coast of Westbrook, Connecticut. He fought the fish for 20 minutes after hooking it with a drifted live eel. This catch gave him the bragging rights of having both the All-Tackle Record as well as the Men’s Line Class Record for striped bass from the International Game Fish Association.

Where is the best place to catch Striped Bass?

The striped bass is widely spread throughout the United States and Canada. In freshwater, they stretch from Canada to the Mississippi, as well as from coast to coast. In saltwater, they can be found on the Atlantic coastline, as well as in the Gulf of Mexico. Strong numbers can be found in Texas, Massachusetts, and Connecticut.

Within these areas, they thrive in water that is 55 to 68 degrees. Very warm or very cold water is not preferred, however they will go into warmer water to feed, and spend more time in cooler water where there is more oxygen.

When should I catch Striped Bass?

Stripers can be inconsistent on where to find them, depending on the time of year and where you are headed. Some will migrate upstream to fresh waters to spawn, others migrate to farther northern waters in the summer, and others still will stay in one environment.

How do you catch Striped Bass?

There are multiple ways to fish for striped bass. You can cast in the surf, fly or spin fish, troll, or jig with both artificial and natural baits. If using live or cut bait, squid, mullet, and worms will work best. For artificial lures, plugs, spoons, and plastic lures are great.

Stripers tend not to search below them for prey, so methods like using electronics or following surface boils and diving birds to locate them and then using topwater lures can be key. 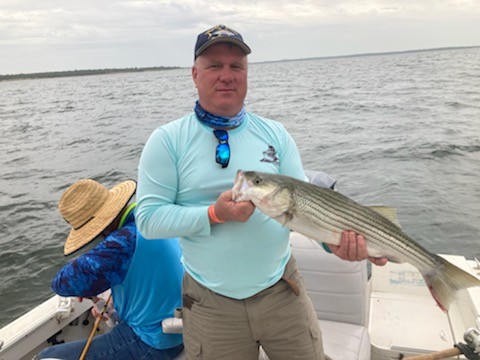 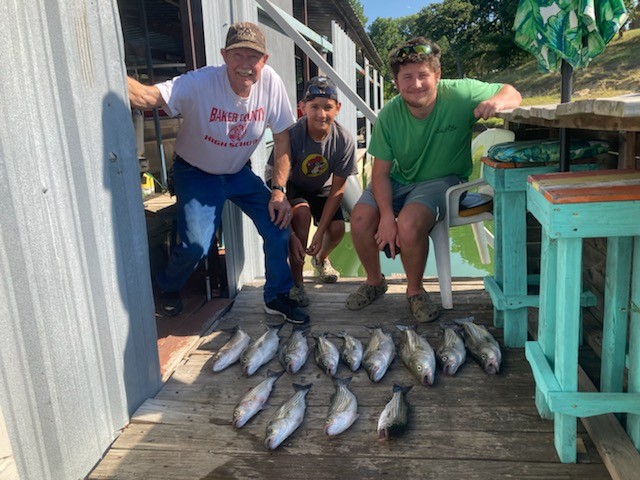 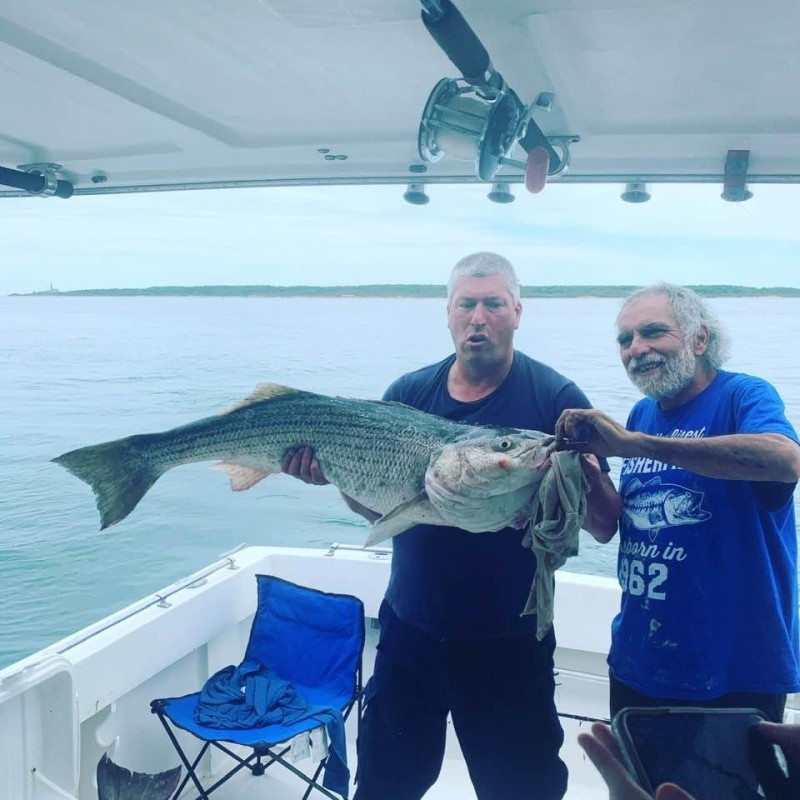 July 2022 has had its ups and downs, sound like....fishing? The heat has been like any other, in July, hot and dry. Don't plan on a limit of fish, as if you got 20 plus fish you had a good day. Someone will always argue with me but the majority had tough days, plenty big fish, but a limit takes lot of patience. I have had good days and tough days but still love my customers as they all know the up and downs. Most enjoy being on the water more than catching a limit! I have used trolling when bait was not working; and bait when trolling was not working. I am using slabs, Arigs, whatever they will hit, bite.
Right now as if August first 2022 we have a full on summer assault of fishing,full limits on Seabass and porgies,Fluking is good! The Stripe Bass have moved over to Blick Island but are still in range from Montauk just have to travel a bit to get to them! Still a few Blue fish around