Everything to Know About Booking a fishing charter in Hawaii

What are the best fishing charters in Hawaii?

Our Damn Good Guides currently offer 8 trips in Hawaii, and the most popular trips in the area are Full or Half Day Aboard the Cherry Pit - 32' Force guided by Bobby, Kona Big Game Fishing - 31' Bertram guided by Dale, and Sportsman's Trip - 40' Bertram Sportfisher guided by Shawn.

Our guides in Hawaii are rated a 4 out of 5 based on 612 verified reviews on Captain Experiences.

All guides on Captain Experiences are licensed, insured, and vetted by our team. You can access their reviews, click through trip photos, read bios to get to know them, and preview trip details like species, techniques, group sizes, boat specs and more.

What types of fishing charters are common in Hawaii?

The most commonly sought after species in Hawaii are: 1. yellowfin tuna, 2. blue marlin, 3. mahi mahi / dorado, 4. wahoo, and 5. striped marlin.

The most common fishing techniques in Hawaii are heavy tackle fishing, trolling, and bottom fishing but jigging and light tackle fishing are popular as well.

How much do Hawaii fishing charters cost?

When is the best time to go fishing in Hawaii?

The most popular season for fishing in Hawaii is summer, and most anglers book their trips 18 days in advance.

Where can I get a Hawaii fishing license and what are the bag limits in Hawaii?

The Hawaiian Islands are the peaks of an underwater mountain range putting deep water and huge fish well within reach. The fishing opportunities in Hawaii will spoil any deep sea angler with travel times measured in minutes and fights that can last hours. Leaving the Honokohau Harbor in Kona Hawaii takes about 5 minutes to get from the docks to the buoys. At this point, start setting out lines because by the time the last one hits the water you are fishing in over 1,000 feet of water. All of the Hawaiian Islands have similarly exceptional fishing and every trip has the potential to hook up with massive and delicious fish. There are plenty of stories about tuna and blue marlin being caught within sight of the buoys.

There is very little difference between nearshore and offshore fishing in Hawaii because of how quickly the seafloor drops off. With that being said, fishing closer to shore is more likely to produce mahi-mahi, wahoo (Ono), and skipjack tuna (Aku). These fish will push closer to shore to hunt currents and deep rock formations. Baitfish will group up around anything that might provide cover but these aggressive fish don’t have trouble finding them.

Mahi typically weigh 25 pounds and grows over three feet long but will occasionally grow much larger with the current record sitting at 82 pounds. Wahoo are the most ferocious of these fish with a mouth full of sharp teeth, a common size of three to four feet long, and a weight of about 20 pounds. The largest wahoo can grow to almost six feet long and over 150 pounds which would be a tough fight for any angler. Mahi and wahoo are also some of the most delicious fish with frim white delicate meat. Skipjack tuna are much smaller at around five pounds for most fish but they have been known to grow well over 30 pounds. With darker red meat skipjack are tasty but oily with a more pronounced flavor that can be hit or miss.

All of these fish all travel in schools and trolling frequently produces multiple bites that happen all at once. Nearshore trips are great for targeting these fish but there is still a chance that one of the larger species will move in from the depths and crush your bait.

Trolling for deep sea giants is the same as nearshore but instead of following the shoreline, you are likely to head away from land. The nearshore fish also hunt further out but they have to compete with the marlin, tuna, and sailfish. These fish are next-level predators in both size and strength. Hooking into a big marlin could mean you will be battling it out for the next several hours.

Yellowfin tuna are widely accepted as one of the most delicious fish in the ocean but trying to land one is no easy task. Yellowfin tuna can grow up to almost eight feet long and 440 pounds with 100 pounds being fairly common. These tuna are formidable fighters that will test the endurance of even seasoned anglers.

The most prized sportfish in Hawaii is the blue marlin. These bluewater behemoths as fast, strong, aggressive, and grow over 1,000 pounds. A blue marlin over 1,000 pounds is called a grander and Hawaii has been responsible for landing over 150 of them. The striped marlin is a smaller relative of the blue marlin topping out around 200 pounds. Both of these fish are fierce and require anglers to be on point if you want to land one.

Starting in the winter months, striped marlin and mahi are in the area and firing on all cylinders until late spring. The wahoo bite picks up fast from late spring into the summer when the yellowfin and blue marlin move in. Summer into fall is one of the best times to take a trip with the yellowfin and blue marlin bite at its peak while also overlapping with all of the other species at different points.

Hawaii is home to tropical weather and stunning landscape. The weather can vary dramatically depending on the island and area you stay in but there is plenty to do wherever you go. If you love being outdoors then hit the hiking trails for amazing views or to reach faraway secluded beaches. If relaxation is the goal then a soft sandy beach with a sunrise or sunset view is never far away. Snorkeling or diving at the historic Cook’s cove is some of the best in the world if you like to immerse yourself in nature. To find your next adventure in Hawaii, all you have to do is leave your room and go looking.

The weather in Hawaii changes rapidly and often so be sure to plan and prepare for your trip. Check out Kona tide times here, and weather forecast here.

How are fishing conditions in Hawaii? 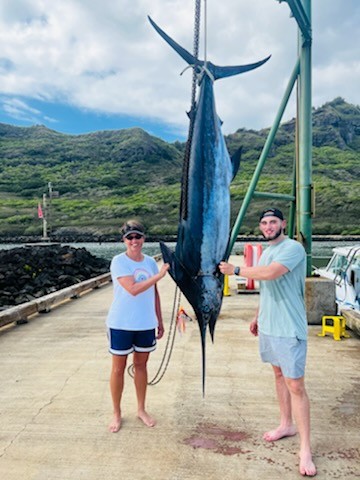 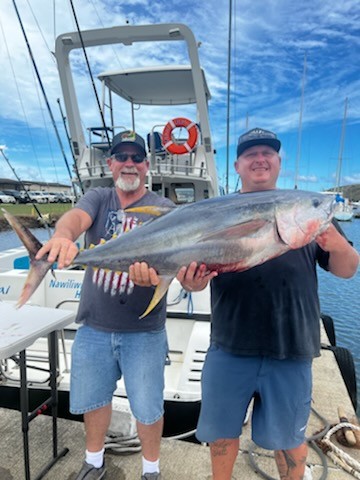 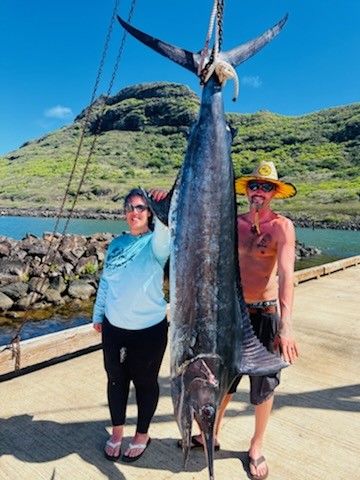